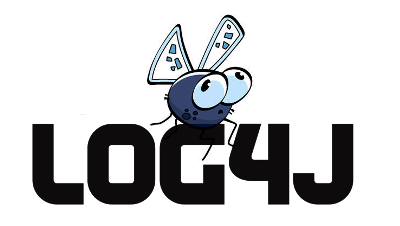 Anatomy of a Bug - Part II

In my last posting, I wrote about a Zuul service becoming unresponsive due to the death of a Log4J thread. Here, I will continue our discussion and try to arrive at a resolution to prevent the reoccurrence of the bug in the future.

Fixing a bug starts with reproducing it. If a bug cannot be reproduced, then it can’t be fixed. A bug reproduction starts with repeating the steps which led to the problem in the first place.

The process started with checking the source code out, matching the version in production, from the code repository. To reproduce the bug faster, log4j2.xml file was modified to reduce the size of response appender blocking queue from 128 to 5. The changes to the log4j2.xml file is shown below:

For debugging the application, the IDE of choice was IntelliJ. Once the Zuul application started in debug mode, the response queue capacities were monitored using VisualVM. As expected, the queue’s total and remaining capacities were 5 and 5 respectively. If you recall from the previous post, the name of the log appender MBean was asyncResponseLog and the corresponding attributes were QueueCapacity and QueueRemaingCapacity.

To ensure the application was working properly, a Zuul endpoint was invoked several times from Postman. Postman is a GUI tool for testing REST endpoints. While the endpoint was exercised, a close eye was kept on the response logger MBean. As expected, the response queue wasn’t backing up.

To recreate the unresponsive Zuul scenario, the AsyncAppender-asyncResponseLog thread was suspended from IntelliJ. This thread is responsible for dequeing the response log message queue and writing it to a file. From the application perspective, the suspended thread might as well be dead. 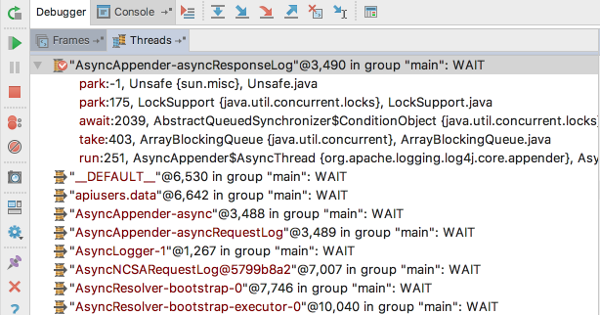 The same Zuul endpoint was exercised once more. After each invocation, the response logger queue’s remaining capacity decremented by one until it was completely full. Remember, the queue size was set to 5. Once the queue was full, the Zuul service stopped responding to any further requests. This helped us to successfully reproduce the bug in the dev environment.

Search for a Resolution

The next step was to find a resolution for the bug. A quick search on Google, led us to a LOG4J2-1324 issue which seemed similar to the problem in hand. It mentioned a asynchronous Log4J thread dying after encountering an exception. The issue was encountered in Log4J 2.2.0 version and resolved in version 2.6.0.

After the upgrade of Log4J version to 2.6.2, there was no change in the behavior of the Zuul service. As the simulation of java.lang.OutOfMemoryError wasn’t feasible, the exception behavior was mimicked in the IntelliJ debug mode by throwing a java.lang.NullPointerException. The null pointer exception didn’t have any implications on both versions of Log4J. Any further consideration of upgrading the Log4J library was dropped.

As shown below, Log4J allows for an asynchronous appender to be non-blocking by changing its blocking property. If the blocking property is set to false, the messages will be written to an error appender if present.

Following the same testing steps as discussed earlier, the AsyncAppender-asyncResponseLog thread was suspended once the Zuul application was started in debug mode. Invoking the Zuul endpoint multiple times didn’t have any adverse effect even after the response logger queue was full. As expected, entries were missing in the response log file.

Once it was proved that a non-blocking Log4J asynchronous appender will resolve the unresponsive Zuul issue, we went forward with validating the changes in a non-production environment. The Zuul service was restarted after making changes to log4j2.xml. As shown below, JVM flags were also changed to attach a remote debugger from IntelliJ:

From IntelliJ, a remote debugger was started to connect with the remote JVM. Once the debugger was attached, the AsyncAppender-asyncResponseLog thread was suspended. Same tests were repeated as earlier while monitoring the asyncResponseLog MBean from the VisualVM. The validation was successful in the non-prod environment. Here is an example of IntelliJ remote debug configuration: 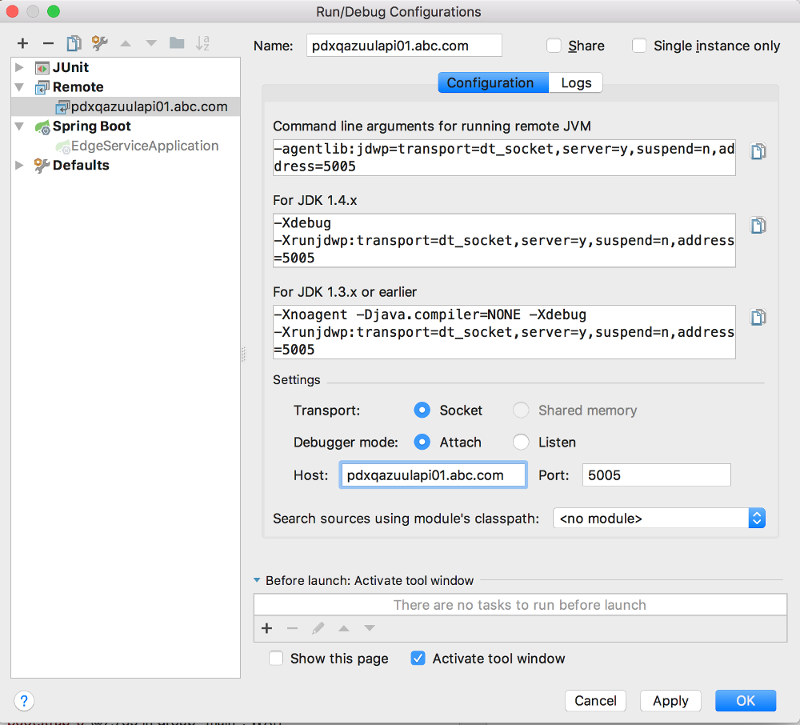 Since the initial cause of Zuul service failure was memory starvation, increasing the heap size was an obvious choice. The following changes were made to the heap sizes:

If the queue is full, the Jetty thread will return immediately without writing any message to the queue. This would help the Zuul service to respond even if any of the asynchronous logger threads dies.