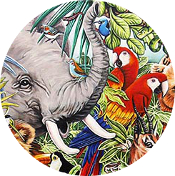 Lately, I am getting a few 'how to do' inquiries on my last Swagger posting. Most questions involve either renaming or sorting REST controllers. I also ran into a few interesting Swagger challenges in the last couple of months. Now that it has been over a year since my lasting posting on Swagger, it is a good time to revisit the subject.

To explore different Swagger customizations, I created an example Github project titled swagger-deepdive. The project consists of multiple REST controllers involving various animals which are part of a menagerie. A menagerie is a collection of exotic animals and birds that are kept in captivity for the viewing pleasure of certain segments of society.

The following controllers are part of the menagerie project: ElephantController, LionController, ParrotController, TigerController, and ToucanController. The backend services are supported by HSQLDB, an in-memory database, and JPA. The project is based on 2.6.1 version of Springfox.

The customization of Springfox and Swagger in the menagerie example can be broadly classified into two different categories: A wiki exists for the menagerie project where I explain each of the Swagger customizations in detail. Incorporating these ideas into your project is a great way to increase the usability of your REST APIs.